23rd of May Sale Televised

Clevedon Salerooms held their latest sale of Antiques and Collectables on Thursday 23rd May at the Kenn Road Auction Centre. With the television cameras present for an episode of ‘The Antiques Road Trip’, along with competing contestants Angus Ashworth and Arusha ‘Roo’ Irvine (and of course their lots!), the saleroom was buzzing as usual, and over 90% of lots sold - as is standard at this saleroom.

The sale was soon off to a flying start as a pen and ink of Shaun the Sheep by Wallace & Gromit artist Richard ‘Golly’ Goleszowski, exceeded top estimate to sell for £250. Eclipsing this was an oil of Clevedon Pier by John Caple, which surpassed its modest estimate to achieved £500, even more than it cost new in the gallery! An older piece of artwork also sold well, when an etching by Noel Spencer of ‘Old Brentford’ sold on commission for £200. Later in the sale, a watercolour by William Payne made a multiple-estimate £280.

For the second time in successive months, a teak curved garden bench performed admirably – back in April one had made £150, this time the even better weather made for a better price of £180. Elsewhere in the outdoor lots, a Brompton folding bicycle made a notable £320. In amongst the toy section, a collection of soft toys which included two pandas, sold for £250. Two Hornby train sets sold well, at £140 and £160 respectively. 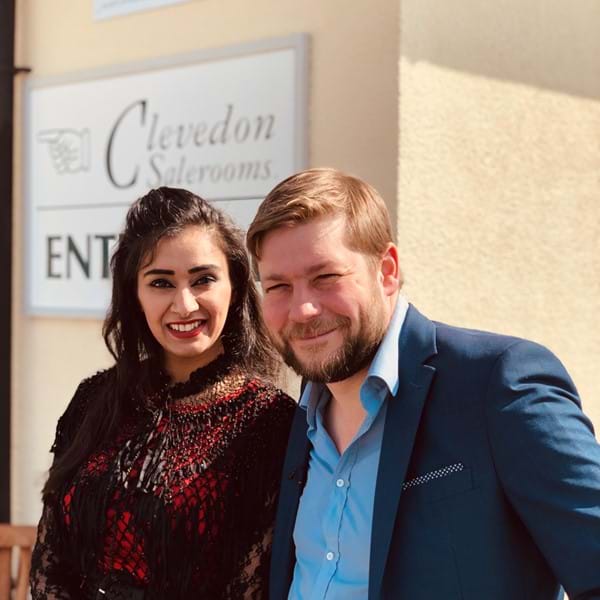 One of the ‘Antiques Road Trip’ lots even makes it onto the highlights reel, as a Middle Eastern vase bought for less than £50 made (spoiler alert!) … £140.  As to who it belonged to and who won, well - you’ll just have to watch to find out… A Spode Italian dinner service far outstripped three absentee bids (and its estimate) to sell for £280, exactly the same amount as a large Continental figure of a musician. Also in the ceramics, a group of Clarice Cliff to include ‘Bonjour’ shape pepperette sold for more than double top estimate at £170. Shelley also proved popular, with Art Deco ‘Sunray’ shape trios in various patterns achieving £110-140. More traditional, a small pair of late Meissen figures and a KPM Berlin figure attracted considerable interest to sell for £350.

Furniture has been enjoying a modest revival of late, and a modern American bureau stamped ‘National Mt. Ary’, more than doubled hopes at £190. Ercol is still performing well, and a ‘Golden Dawn’ elm sideboard sold for £200. Better than this was a pair of early 20thcentury mahogany cabinets from a Worcestershire vendor, at £480.

The sale concluded with silver, jewellery and watches. One interesting lot was a group of silver-coated fruit, vegetables and nuts which achieved £140. Elsewhere, a pair of silver pepper grinders made £160 and a three-piece teaset £220. An 18ct gold, sapphire and diamond dress ring almost doubled hopes at £280. An Omega Seamaster 600 sold for £200 despite a replacement bracelet.

The next sale is the quarterly Fine Art sale on Thursday June 13th, which includes a fantastic 19thcentury Italian pietra dura cabinet from a property in Weston-super-Mare, estimated at £8,000-12,000.