Clevedon Salerooms held their latest Quarterly Specialist Sale on Thursday 1st September at the Kenn Road Auction Centre. Over 520 lots were on offer, and the sale commenced with a superb collection of micromosaics and intaglios from a local private collection which totalled a staggering £30,000. 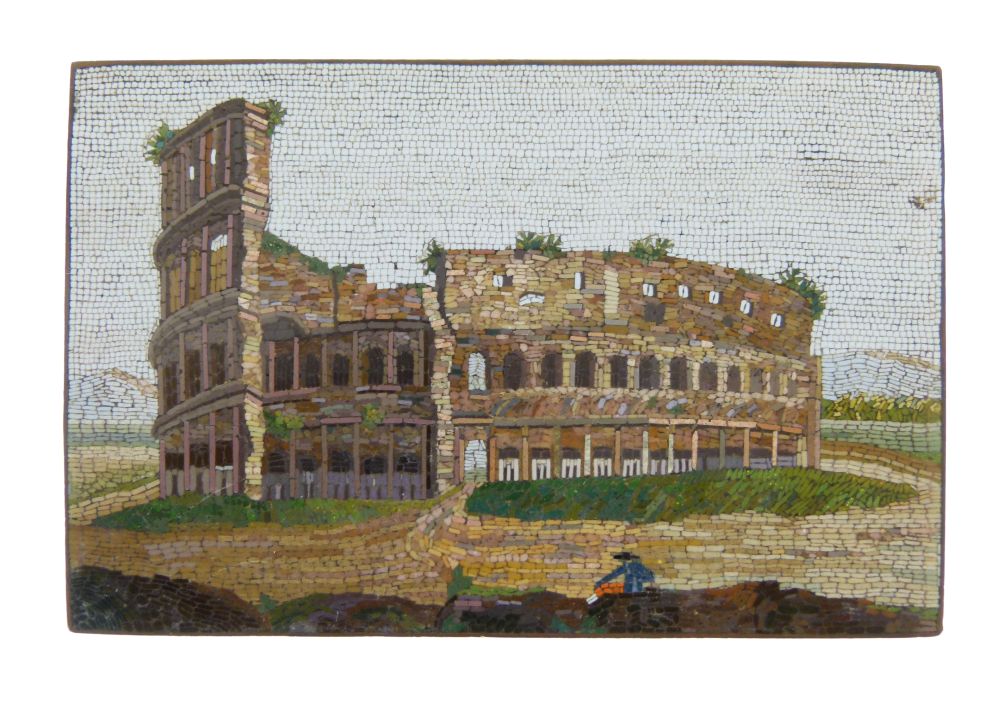 The micromosaics - stunningly intricate souvenirs of the European 'Grand Tour' or the late 18th and 19th Centuries, comprised of hundreds of tiny tesserae - were consigned from images sent via email. Director and Senior Valuer Mark Huddleston undertook research to identify the locations and mythological figures depicted, and the results exceeded all expectations as a view of the Roman Colosseum took £3,600 [LOT 39], the same price as a smaller panel of Pan rutting with a goat, whilst a roundel depicting the Doves of Pliny followed closely behind at £3,000 and a small oval panel of Eros in his chariot achieved £2,600.

From the same source, a collection of intaglios - carved hardstone panels traditionally set into rings and seals - also stunned the room as thy also totalled over £15,000. Divided into groups by material, shape and subject, they attracted strong online and telephone competition, with four lots selling for over £3,00 each and a fifth £2,800. Top price in the jewellery section was the £7,000 paid for a single-stone diamond ring of some 2.6 carats. In the watches section, a Breitling Chronomat Evolution wristwatch had unusually been sent in by post, valued from images. A double-estimate £2,400 was achieved. A 'Dirty Dozen' wristwatch (so-called as one of a group of twelve models of desirable Military issue wristwatch) took £1,800. One bid better was the £1,900 paid for a fine Victorian 18ct gold chronograph pocket watch by Thomas Russell. 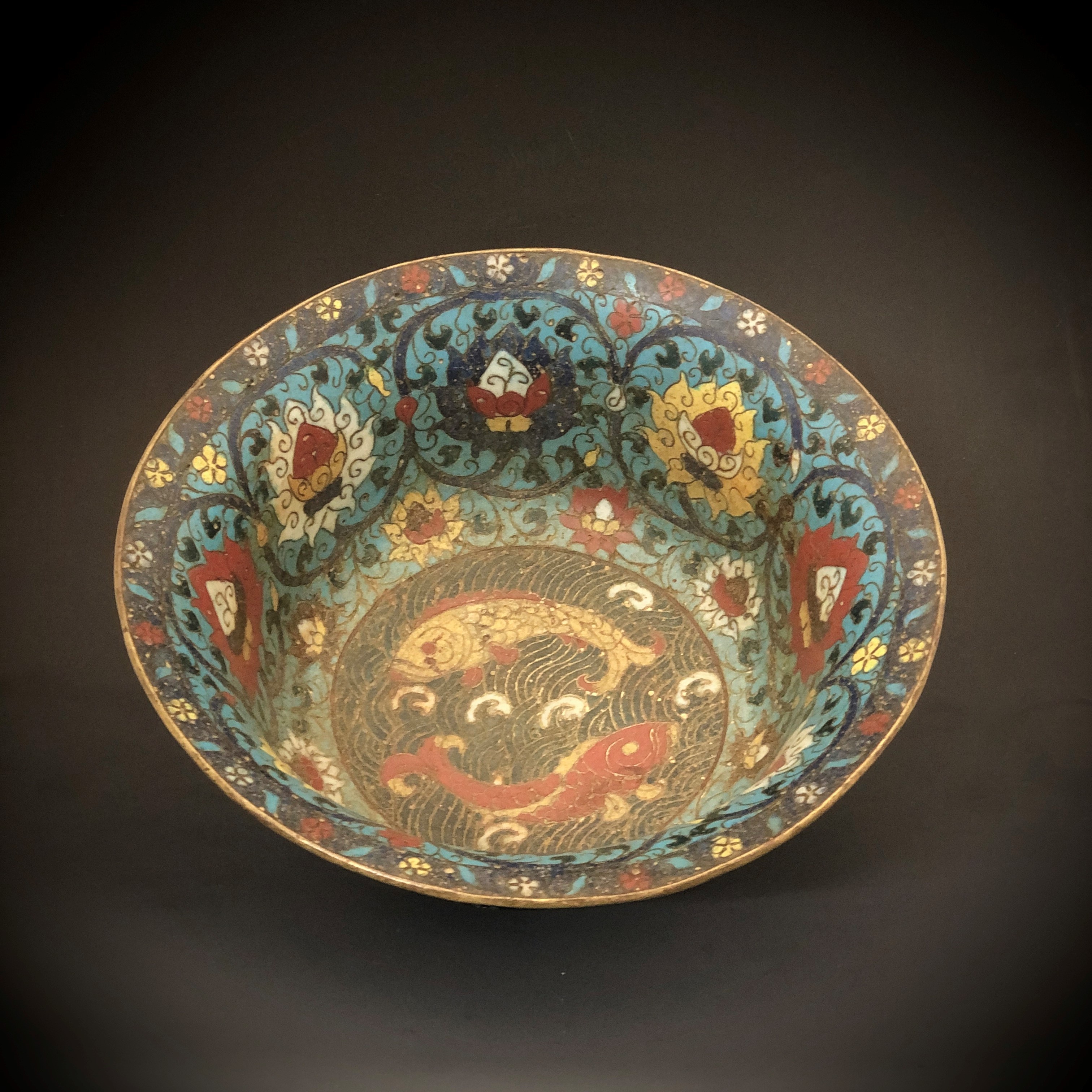 The high watermark set by the ring was then eclipsed not once but twice, all in the space of two lots. Achieving joint highest price of the day were two star performers from the Asian Art section, each with their own Cinderella story. A Chinese cloisonne enamel bowl had arrived in a carrier bag at the saleroom on a valuation day, having languished unloved in a cupboard under the vendor’s kitchen sink.  It was originally destined to be sold alongside a ginger jar in the three-weekly Interiors sale, but the Clevedon Salerooms valuers sensed it could have potential and held it back for the Specialist sale. The worst-case scenario could have been that the bowl was 19th Century, and worth around £200... if earlier, then four figure prices have been paid for late Ming pieces of the 16th Century. Unmarked beneath, and with no real provenance of note, the images went online and fingers were crossed. The hunch proved to be right, as immense competition on two live internet bidding platforms resulted in a long bidding battle to £8,200.

In a similar story, a group of five Chinese Republican period (early 20th Century) porcelain vases achieved the same price. Finely painted and decorated with Chinese script, they had caught the eye of valuer Chris Yeo on a visit to the vendor’s home, where the vases had spent the last thirty years languishing at the bottom of a china cabinet, having been inherited from a relative. Chris had sold one such vase years ago for a good sum, but could lightning strike twice? A resounding 'yes' was the answer, as £8,200 was record for the second lot in succession. Elsewhere in the section, a carved jade panel from the aforementioned 'micromosaics' owner was another hit when it sold for a multiple-estimate £2,800.

Items with a strong local connection often prove most popular at the Salerooms. Having been offered at auction further afield, a pistol by rare local maker Joseph Callaway found its way home. The vendor had previously waivered over an offer of £1,500, but was rewarded for declining this as it sold at Clevedon for a more deserving £2,400. Another local maker, Joshua Springer, was responsible for a rare 18th Century brass table telescope. Despite requiring some attention, its desirability meant that £1,000 was paid. Also with a local flavour, a rare painted wooden diorama of a Bristol to London mail coach was the subject of strong bidding from a local buyer and Clevedon Salerooms regular. He had been waiting decades to buy a diorama of this quality, and his determination paid off as it was eventually secured for £2,800. 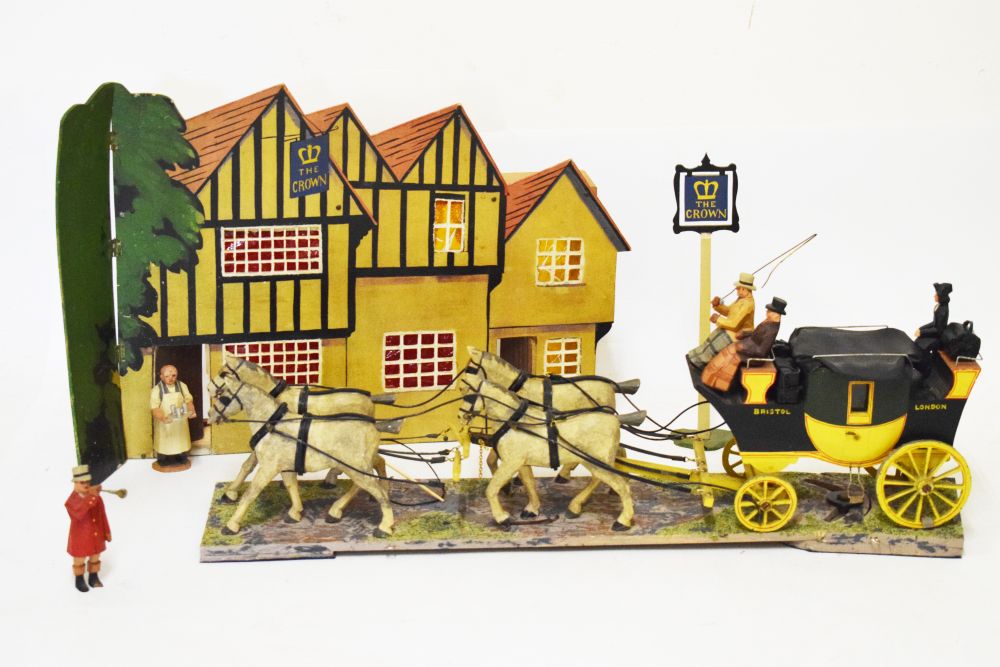 The Paintings section also yielded a number of strong prices. Fourth highest of the day was the £5,800 tendered for a good mid 19th Century oil on canvas of a farmer with prize bull and sheep. It had been consigned from Worcestershire by a returning customer and long-standing contact of the auctioneers. Although it required attention, it held great promise. Advertised nationally, it attracted the attention of a Midlands-based specialist in animal paintings, who secured the work for a multiple-estimate £5,800 [LOT 370]. Also selling well were two prints by L. S. Lowry, bought as investments by their owner a few years previously for  £1,100 each. They proved to be wise buys, as St Mary's Beswick sold for £2,200 and "People Standing About' followed closely behind at £1,900. A single-owner collection of prints by Norman Ackroyd also created a stir, with top prices of £1,600 and £1,500 respectively paid for two sets each of ten etchings.

Furniture closed the sale, and from a local Nailsea estate a beautifully primitive Windsor chair illustrated the strong demand for the best period pieces as it sold for £1,400 [LOT 482]. With some 85% sold and a total well above expectations, the sale represented another resounding success for a saleroom going from strength to strength. The next Interiors sale on September 22nd promises almost 800 lots, and the November 24th Specialist sale is already looking very promising indeed.