Am I not a Free Man and a Brother? 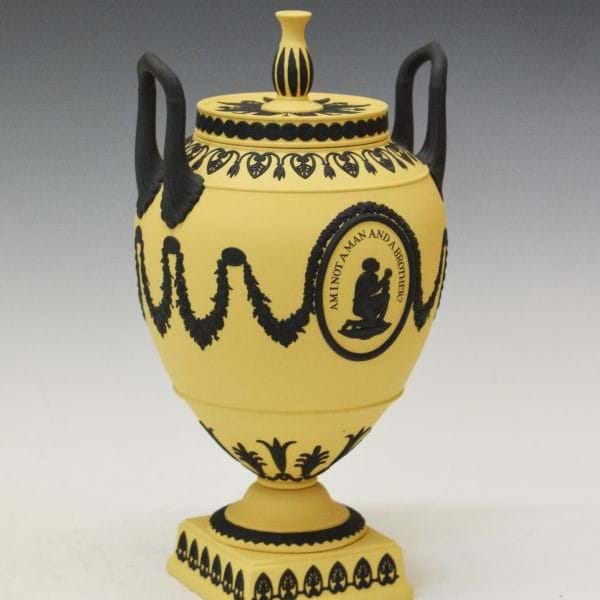 The familiar name of Josiah Wedgwood and his Staffordshire ceramics will be familiar to many antiques aficionados. Less familiar perhaps is the fact that he was also a very keen social reformer and humanitarian. In the latter years of the 18th century, well before the Abolition of Slavery Act of 1834, Wedgwood was spurred into campaigning to end this social injustice via his friendship with the Abolitionist and reformer, Thomas Clarkson. His simple cameo became a well-known motif of the movement – the kneeling shackled slave and the memorable question above. Wedgwood’s slave cameos were distributed amongst enlightened society figures of the time and became a political statement as well as a fashion statement. Clarkson wrote at the time: “…ladies wore them in bracelets, and others had them fitted up in an ornamental manner as pins for their hair. At length the taste for wearing them became general, and thus fashion, which usually confines itself to worthless things, was seen for once in the honourable office of promoting the cause of justice, humanity and freedom.

As part of a very elite limited edition amounting to a handful of pieces, the modern-day Wedgwood company issued a commemorative vase copying this timeless cameo. A collector with links to Clevedon Salerooms decided recently to sell a number of choice Wedgwood lots from his collection, and these were the subject of a fierce bidding battle on the telephone and online. The vase fittingly exceeded its top estimate when it sold for £1,600, to a UK-based collector - who has vowed never to sell it.