Clevedon Salerooms held their Summer Specialist Fine Art Sale on Thursday 9th June. Having generated a great deal of interest, lively bidding was in evidence throughout the day, with consistently strong prices and a sale total well over expectations from over 540 lots on offer.

In a day which saw many lots fiercely fought over, leading the pack were two outstanding cased pairs of pistols. A pair of late 19th century French flintlock presentation pistols made for the Turkish market were a tour-de-force of the gun-makers art, their pristine condition suggesting they were likely to have been intended as display pieces and never used. Consigned from a London address - from where many of the day’s top lots originated - a volley of bids saw this remarkable pair take the day’s top price at £16,000. Heralding from the same source were a pair of French duelling pistols. In this instance, the quality was matched with a fascinating military provenance, having been presented to a British delegate in lieu of a military decoration by the French government, a winning combination which saw them shoot well passed their estimate to sell for £15,000. [LOT 226] 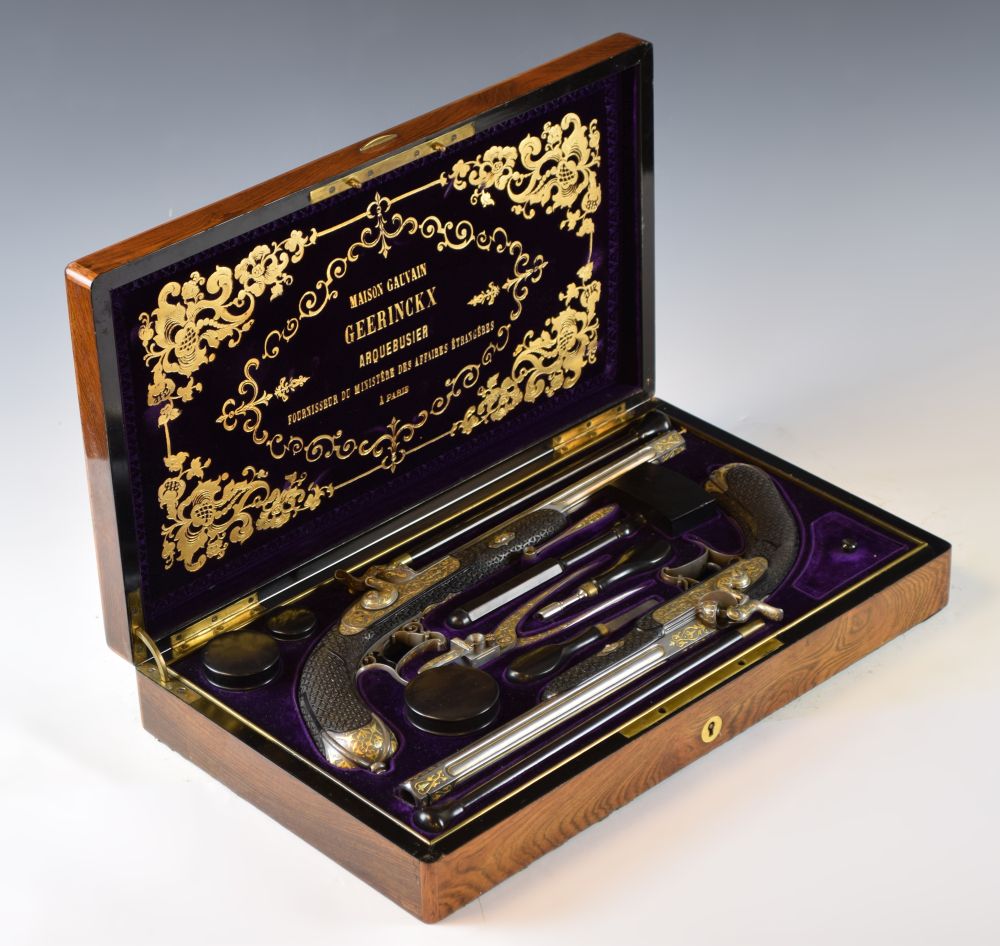 The same property also yielded a remarkable collection of art glass from the golden age of French glassmaking by the likes of Daum, Galle and others. A pate de verre vase by Francois-Emile Decorchemont, decorated in striations of blue, green, and mauve, with scarabs and lotus leaves in relief, was the epitome of French Art Deco and, like several other pieces in the group, came with a Christie’s provenance. This obviously stood it in good stead and spirited bidding saw the gavel brought down at £6,800. Another piece of pate de verre, this time a coupe vase ‘Gazelles et (des) Fleurs’ by Gabriel Argy-Rousseau also performed well at £4,000 [LOT 293], whilst a stunning Muller `Freres, Luneville glass vase with landscape decoration sold for £2,400.

With Clevedon Salerooms now holding monthly Bristol valuation and consignment days, it was gratifying to see a solid Bristolian provenance for one of the day’s top performing lots. An Italian glass ‘Pulcino’ bird in an eye-popping shade of bright orange had been bought as a birthday present from the Bristol Guild on Park Street in 1963 for the sizable sum (for the time) of £12 and named “Fred” by its owner. Now a much-coveted example of mid-century design, Fred flew away to his new home having sold for £2,500 [LOT 471]

Amongst some strong results amongst the silver, first prize went to a set of George II silver tea canisters and sugar box fitted in an ebonised case with silver plated mounts. Assayed for 1750 from the London workshop of Samuel Herbert, and with fine rococo decoration, it scooped top price at £6,000 [LOT 71]. A different sort of first prize was the Victorian Irish silver replica of the 'Auld Mug' America's Cup Trophy, which sailed away at £1,800, whilst another impressive piece of Dublin silver, a 1914 replica of the Ardagh cup sold for £1,600. An extensive canteen of German 800 standard 'Chippendale' pattern cutlery sold for £2,800. 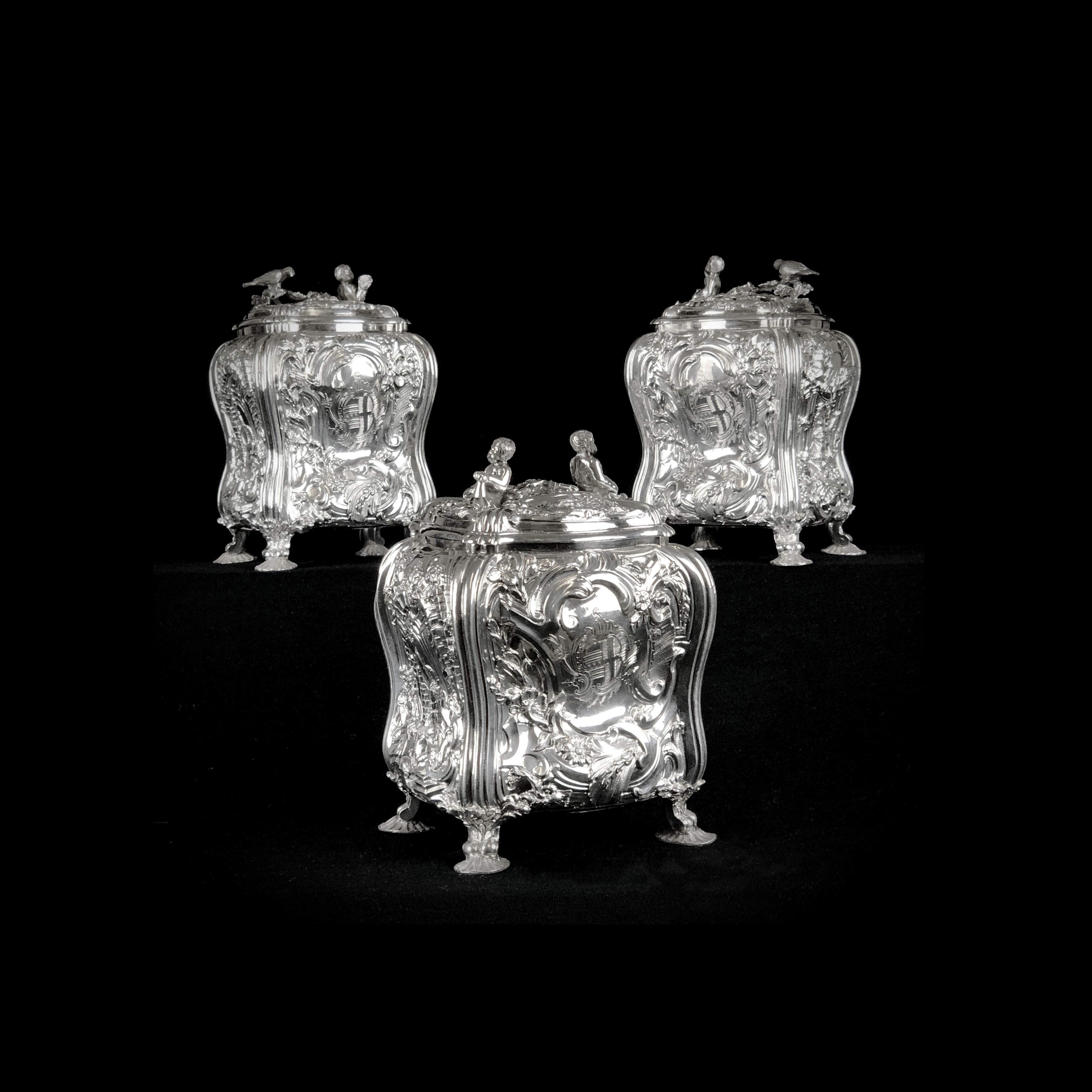 Surprise of the day came in the unlikely (and somewhat unnerving) form of a German bisque headed 'googly eye' doll which completely eclipsed its estimate to sell for an astonishing £3,000. [LOT 201] This particularly lot was being offered for charity, with Clevedon Salerooms waiving their standard seller’s commission in aid of a worthy cause. More familiar territory was provided by a small album containing a collection of 1950s and ‘60s autographs, the standout of which was a 1963 John Lennon autograph which came with a photograph of the young Beatle taken at the time with the young female autograph hunter, which had been brought in on a Bristol valuation day. The focus of an intense battle between two online bidders, it sold for £2,600.

Top price in the Ceramics section, was for a Royal Doulton figure, ‘Judge and Jury’ the rarity of which outweighed its significant condition issues, to see it finally knocked down at £1,600. Also performing well, a German Rhenish Westerwald salt glazed stoneware 'pilgrim' bottle. Originally destined for a General sale and estimated accordingly, it had been spotted by Valuer Mark Huddleston as an item of interest and ‘upgraded’. His hunch proved correct and it went on to sell for an impressive £1,100.

An oil on canvas, 'Fragrance of a Rose', by a follower of Jean Francois Portaels, was the star lot amongst paintings and artworks, selling for £4,600. Those with more contemporary tastes were also well served. 'Ritratto', a gouache and watercolour portrait dated 1944, by Marino Marini, sold for £3,000, the same price as a marble abstract form sculpture by Lebanese sculptor Alfred Basbous dated 1976. Also from the 1970s and from a Bristol valuation, a wonderfully enigmatic small stoneware elliptical bowl by Dame Lucie Rie, which sold for £1,400.

Foremost amongst Furniture, was a very fine mid-19th century Italian marquetry and micro-mosaic table attributed to the Florentine workshops of Luigi and Angelo Falcini, which got away at £2,000, an early 18th century south German marquetry cabinet on later ebonised stand sold for £1,800. Irish eyes were certainly smiling when a 19th Century Killarney marquetry work table sold for £1,500. Finally, we found out that it’s not just fairies that we need to look out for in the bottom of the garden. A garden in Belgium had been the unlikely resting place of a pair of carved limewood recumbent lions, which the owners, believing them to be of little value had contemplated painting gold. Fortunately they decided against it as they’re two lions turned out to be rare survivals from the 16th century which, despite their weathered condition, they went on to sell for £2,200 – one of the day’s many roaring successes. [LOT 172]

Clevedon Salerooms next Quarterly Specialist Sale, for which entries are now invited, will be on Thursday September 1st.  Free valuation days are held at the Saleroom every Monday (except Bank Holidays), together with specialist jewellery days remaining every third Tuesday. Free Bristol valuation days are held every month, please visit the website for more information www.clevedonsalerooms.com