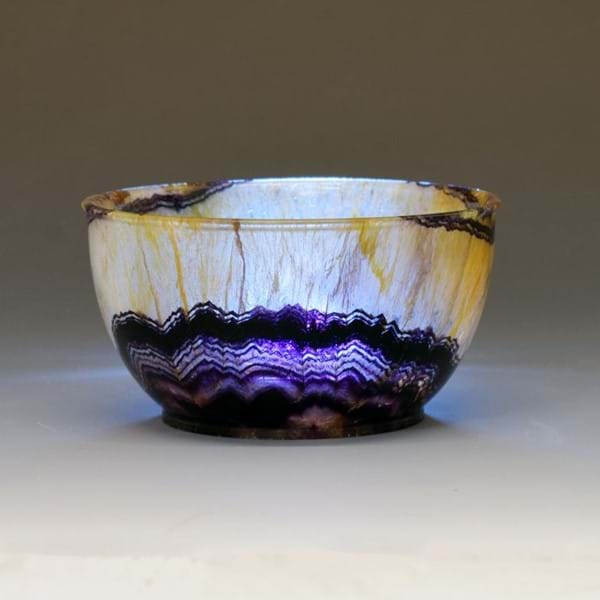 To those unfamiliar with Blue John, he’s not a he, it’s an it! A mineral which only occurs on one single hill, up in High Peak of Derbyshire beside the village of Castleton. If you ever venture up there, you will find a community existing almost entirely around the fame of the stuff. It is beguiling in its amethyst-coloured translucency and the ‘veining’ which forms naturally, in no less than sixteen different caverns across the cave complex. Blue John has been prized for centuries, coveted by no lesser figures than King George III and Catherine the Great of Russia. The Midlands Industrialist Matthew Boulton marketed its properties to the country houses of Britain, which saw collections formed at such seats as Chatsworth, Lauriston, and Kedleston Hall. It is rare to see collections turn up at auction, so when Clevedon Salerooms were approached by a contact of one of their valuers to sell a number of fine pieces, they jumped at the chance. Top performer on the day was a beautiful bowl, which at around 4 inches diameter packed a great deal of quality into a small package. It doubled hopes at £2,000, bought by a collector who has been an avid fan of Blue John since before 1950. It will be returning to the town of its birth before too long.