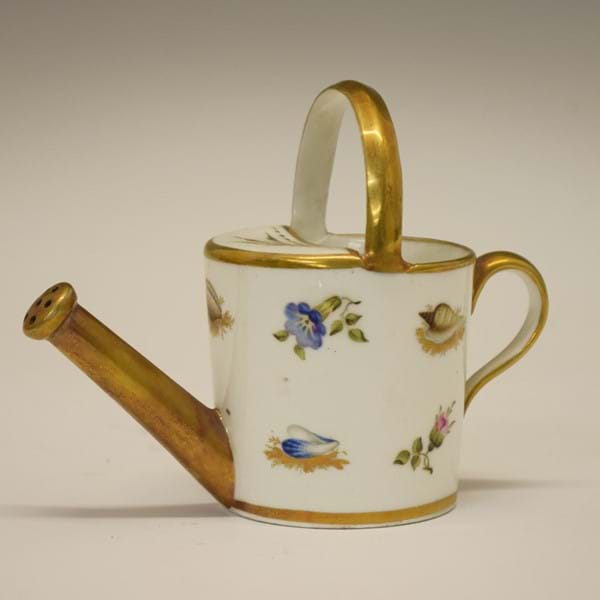 Clevedon Salerooms held their first Quarterly Sale of Antiques, Fine Art and Collectors’ Items post-lockdown on Thursday September 3rd at the Kenn Road Auction Centre. With the ongoing Covid situation and ever-changing guidelines, the auctioneers opted to continue with the successful format of extended, timed and socially-distanced viewing days plus online and telephone bidding.

Of significant local interest was an offering of Bristol books, maps and related ephemera from a Sneyd Park collector. These included items purchased from the important residual dispersal of the effects G.E. Weare, last sold by auction in 1912. The collection totalled a staggering £15,000 and included an album of 18th and 19th century local election ephemera at £1,500, a folio of Samuel Loxton sketches at £1,900, and two brass dockyard tipstaffs (truncheons) for St. Mary Port at £2,200, underbid by a US collector. They were sold with the original 1912 dispersal catalogue where they were recorded. Also in the collection but unrelated to Bristol were a rare early 17th century ‘Merchant’s Avizo’ outlining behaviour “verie necessarie for their sons and servants, when they first send them beyond the sea, as to Spaine and Portingale, or other Countries” at £3,800, and a mid 19thcentury ‘Byrne’s Euclid’ at £3,800.

The sale commenced with an Asian Art section which included a good pair of Chinese blue and white porcelain baluster vases and covers, sold for a triple-estimate £1,300, and a Chinese crackleware jardiniere which saw an online bidding battle take it to £1,400. The European Ceramics section saw a rare early entry in the form of a 17th century stoneware ‘krug’ with portrait of Queen Mary (1688-1695). Previously seen on the Antiques Roadshow, it sold at a mid-estimate £1,700. Just eclipsing this was another equally rare lot of later date, in the form of a Swansea miniature watering can. These items were based on the cylindrical ‘coffee can’ design but only a handful are known. It duly sold for a triple-estimate £1,900 [LOT 50]. Moving into the 20th century, a beautiful Ruskin pottery (Smethwick, Birmingham) high-fired vase by William Howson Taylor standing just under 10cm/4” high attracted great internet interest, and again the estimate was left behind as the piece sold for £1,500.. A small selection of glassware was headed by a rare early 18th century German glass goblet which far exceeded expectations to sell for £1,400.

The silver section included a couple of large flatware canteens, and with the increasing price for silver these all achieved over top estimate. Best was a suite of Old English pattern at £2,400, just pipping a Chippendale pattern set at £2,350. Far eclipsing both of these was a Continental set by the acclaimed Danish silversmith Georg Jensen. In ‘Caravel’ pattern, it achieved a pleasing £5,550, well over estimate. Also notable were a pair of Hanau silver stirrup cups at a mid-estimate £1,300.

The jewellery section followed, and amongst the highlights were a superb platinum, sapphire and diamond ring at £3,400, and an Archibald Knox (for Liberty) diamond and moonstone clip at £2,500 [LOT 174]. From the same source came a fine 18ct gold, blue enamel and diamond watch set at £3,500. With gold prices especially high at present, an 18ct half hunter pocket watch tripled hopes at £1,300, the same price paid for each of three 1970s South African gold Krugerrands. The best of the wristwatches was a Jaeger LeCoultre ‘Master Reserve De Marche’ at a double-estimate £2,800.

In the Collectors’ Items section, an Indian ivory box previously offered at £2,000-3,000 estimate (and £1,500 reserve) was given a second chance, and the £1,200-1,800 estimate was left behind as the box sold for £2,800. A rare diorama advertising ‘Carters Tested Seeds’ also sold well at £2,000. A small collection of antiquities were consigned from a local deceased estate, unfortunately with scant detail available regarding origins – but having been inspected on the viewing days by various experts, a group of mosaic pavement fragments made £2,200.

The Paintings section included a superb 19th century Spanish portrait consigned from the same good private home as the sapphire ring and the blue enamel watch. Gracing the catalogue front cover, the handsome chap, painted by Antonio Maria Esquivel, sold at a double-estimate £2,200 [LOT 363]. Furniture was led by a West Country type food cupboard inlaid with date 1620, which took £1,100 [LOT 504]. The auctioneers now turn to a general sale well in excess of 850 lots courtesy of some record-breaking valuation days, and are also already taking lots for the Thursday 3rd December quarterly sale to include jewellery and watches, closing for final entries Tuesday 3rd November.