Chinese ‘lamp’ lights up the auction at Clevedon Salerooms 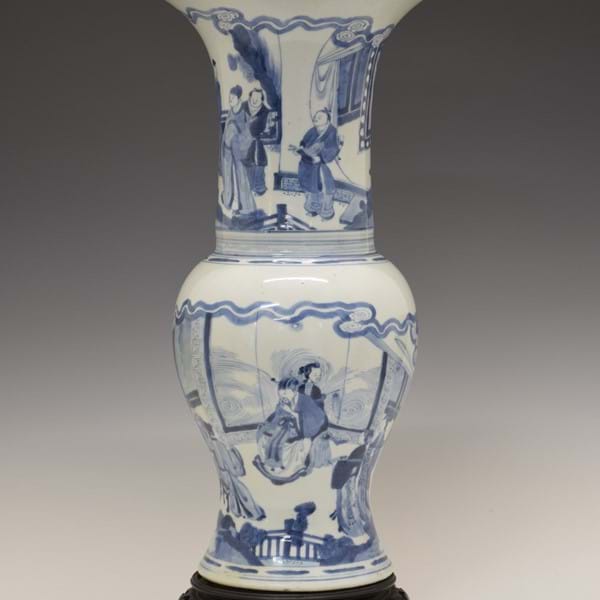 A new record total of 1,167 online bidders registered for the quarterly sale of Antiques, Fine Art and Collectors’ Items held at the Kenn Road Auction Centre on Thursday 12th March. Almost 900 bids were registered online, but the saleroom was still packed to see a larger-than-average auction of over 850 lots, bolstered by significant consignments from properties in Bristol, the Mendips and South Wales, combine to achieve the best overall hammer total since 2018, with a selling rate of 85%.

The Oriental section often provides some star lots, and this time proved no exception. A Chinese ‘yen-yen’ vase was brought in to one of the auctioneers’ free fortnightly free valuation days by the daughter of the owner, a 93 year-old local lady. The vase originally entered the building as a table lamp, complete with shade and wooden base. Sadly, it had been drilled to accommodate wiring.

At the time, the auctioneers felt that despite the conversion it was a good shape, and worth ‘holding’ for the quarterly sale, but suggested omitting the shade and light fittings to help it to sell. Although a modest estimate took into account the conversion, the specialist Chinese trade felt that they had seen something special, and despite the drill hole it duly made a multiple-estimate £5,000 - much to the delight of the vendor’s daughter, who was in the room to see it sold [LOT 271]. Elsewhere in the Oriental section, from a South Wales estate came a lovely Chinese sang-de-boeuf baluster vase, competed for by three telephone bidders, one of whom triumphed at a multiple-estimate £2,200.

A 1.5ct single-stone diamond ring from a Weston-super-Mare probate set the tone earlier in proceedings, as it quadrupled estimate to take £2,400. Another 1.3ct single-stone soon followed near top estimate at £1,900, and a 1.07ct sold for £1,600. Highest price I the section was for an impressive two-stone crossover ring totalling 2.8cts, which sold for £5,000. A beautiful diamond carriage brooch also took four times estimate as a bidding battle in the room and on the telephone finally resulted in a win for the latter at £2,200 [LOT 67].

Two 9ct gold cigarette cases, both weighting 140 grams and from different properties, both exceeded top estimate to sell for £1,600 each. A box of a different kind followed – a rare late 17th century oval cedar and horn snuff box dated 1688 and engraved ‘It is a frend to whom I lend’. Previously valued elsewhere at just £250-400, the box was thoroughly researched by the auctioneers and duly sold to a specialist collector at £1,500.

The watch section was led by a rare early Rolex, which had been donated to a local charity and was sold by the auctioneers free of charge. Where they had initially hoped it might be worth £150 due to the name, Watch Specialist and Managing Director Marc Burridge undertook research and found that it had rare ‘Kew-A’ certification – one of just 145 in the world which were submitted to the Royal Observatory at Kew and adjusted in Geneva by the Rolex master timer, all recorded in 1949. A pleasing £4,000 was achieved for the charity [LOT 116]

A good selection of coins and medallions were led by a cased set of two 22ct gold Churchill medallions by John Pinches, achieving a top estimate £4,000. Closely following was a boxed four-coin collector’s set of 1887 Queen Victoria Golden Jubilee coins comprising £5, £2 (double sovereign), sovereign and half. These almost doubled hopes at £2,200. Later in the sale, a large selection of medals, principally from one property, provided some great results as a George VI Military Medal for Bravery in the Field stunned the room to take £4,200 online. From another local estate came two superb violin bows, which were examined by a specialist consultant. The first, by Hill & Sons, sold well above estimate at £1,800, but the second by Tubbs went a lot further to sell for a staggering £4,000 to a Netherlands collector.

The picture section was also larger than usual, and contained a number of excellent results. From a local country house, an oil initially thought the be by ‘A. T. Chin’ according to the erroneous label, was tracked down to the important Western-trained Chinese artist, Teng Hiok-Chiu. Sensibly estimated, this tripled hopes at £3,500. Also on a Chinese theme, the front cover lot was a pair of Chinese oils on canvas, more than doubling hopes at £4,200. Top price in the section was for a superb oil by Scottish artist Donald MacIntyre. Competed for on three telephones, it made £6,000 – according to one of the telephone bidders, a very strong price indeed [LOT 618]. A small oil by seminal Bristol-born artist Mary Fedden, portraying her husband, Julian Trevelyan, sold for £3,000. Another familiar local name, Reg Gammon, featured as three works were offered from another local estate. The best two of these sold for £2,200 apiece. Gloucestershire-born artist Kenneth Webb, more usually noted as Irish, also fared well with an oil selling for £2,800.

The epic sale concluded well after 6pm with Wines and Spirits, including a bottle of 1976 Macallan 18yrs (bottled 1994) at £1,100, a collection of fifteen bottles from the Scotch Malt Whisky Society (SMWS) sold individually for a cumulative £4,100.