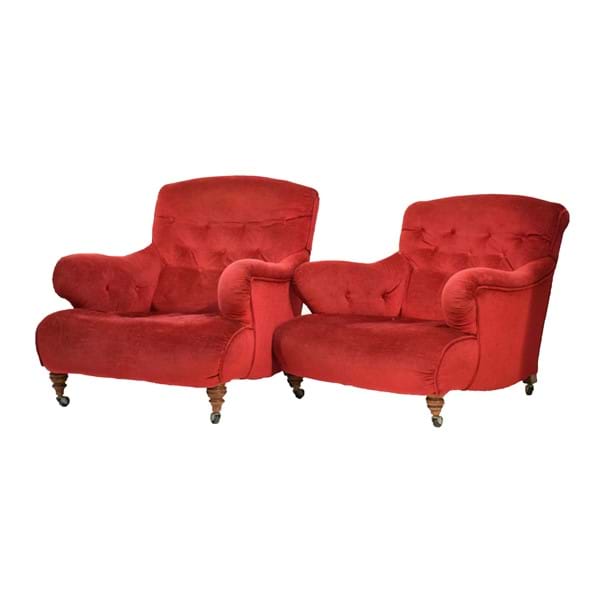 Clevedon Salerooms held the first of two fortnightly auctions in February on Thursday 6th at the Kenn Road Auction Centre. The sale was bolstered by a significant consignments: one being from a Chew Valley property, and the other an email valuation request from photographs, of the type received daily by the auctioneers - but this one proved to be better than most. One interesting revelation in this instance was that a relative of the vendor had been a London furniture retailer.

From the second source, a deep-buttoned Chesterfield settee and a pair of easy chairs with matching slightly worn red plush looked fairly innocuous from images, but one rear leg of the settee was stamped with a serial number. Despite the lack of firm evidence to confirm this (in the form of original stamped castors, or the typical maker’s name stamp to the leg, for example), a couple of bidders were willing to gamble, and felt that the number could relate to the renowned firm of Howard.

Starting in the low hundreds, internet bidders took the price to around £700 against a strong commission bid left with the auctioneers, before the room bidder took things much further, still competing against the commission bidder, until eventually, after a tense minute with the price advancing in twenties, then hundreds and finally two-hundred-pound increments, the hammer fell to the determined room bidder at a staggering £3,200 [LOT 611]. Whilst confirmed Howard prices can indeed sell in this range and even beyond, it can be seen as a very strong result for anonymous pieces with replacement castors.

From the same source, a Georgian-style red lacquer tripod table also old for a multiple-estimate £850, again a tremendous price for a ‘revival’ piece. Not to be outdone, from the Chew Valley property a refectory-style kitchen table with a pleasing patina to the top sold for a multiple-estimate £880 [LOT 293]. A second scrub-top table also left its estimate behind to sell for £520. Even modern furniture gets a look-in on the highlights reel, as a good quality pouffe or window seat of trefoil design sold for an astonishing £650. Another notable result was the £350 paid for a Victorian mahogany breakfront triple wardrobe – the sort of strong price not seen for several years.

At the start of the sale, one of the Jewellery section highlights was an 18ct gold, emerald and diamond ring, which was the subject of no less than seven commission bids. None of these proved to be quite enough, as it sold in the room for a double-estimate £580 [LOT 4]. This price was eclipsed soon after by an 18k snap bangle with no less than 100 small diamonds including a central row of baguette-cut examples. The hammer price was £1,050. With gold prices still strong, a 9ct watch Albert went above estimate at £480.

In the silver section, two suites of Continental flatware sold above expectations, one at £720 and the other at £310. Also selling well was a three-piece tea service at a double-estimate £280. From a large single-owner collection of coins, an Isle of Man two-coin gold set achieved £480 and a double sovereign with attached scroll pendant £440. A four-sovereign Jubilee coin set was also a success at £920. A pair of cast metal figures of Medieval-style knights on brackets were another pleasing result at £320 where less than £100 was expected. The catalogue front cover lot, a printed card advertising Golden Valley Ceylon Tea, also attracted strong bidding to sell for a multiple-estimate £250 [LOT 296].

Perhaps the biggest surprise was a small brass door knocker (presumably internal, at just 8.5cm high), cast with a seaplane commemorating the 1929 Schneider Cup. Two items had been found sold elsewhere at auction at £30, resulting in a modest estimate for this piece – but the bidders thought otherwise as the price soared to £400 [LOT 166). A pair of French School oils from the aforementioned Chew Valley property also surprised at a triple-estimate £320. Overall, an extremely impressive 92% of lots sold, an especially strong result for so early in the year.

The next two weeks see a fortnightly sale on February 20th and finalising of the 12th March quarterly fine art sale catalogue, which promises to be a very strong auction - with highlights including an early Rolex ‘Speedking’, a Mary Fedden oil painting, and a 1960s ‘Mouseman’ golden oak table plus six chairs.