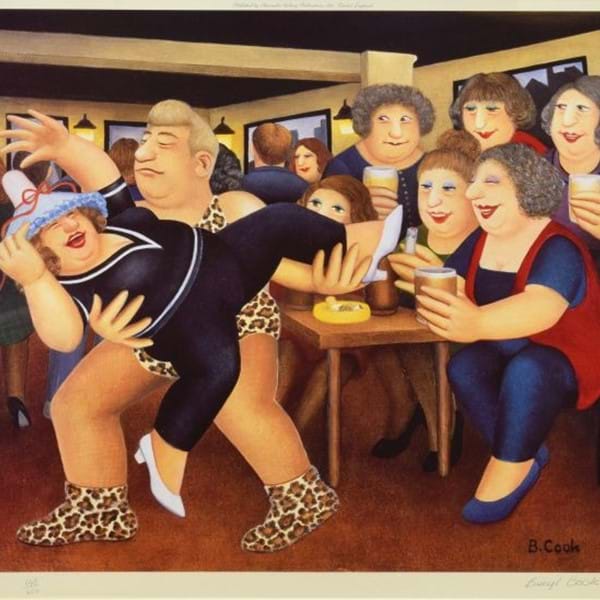 The sale began with a bang as a modern limited edition sculpture by local artist Carol Peace performed spectacularly, fetching a multiple-estimate £1,000 [LOT 4]. Staying with limited editions, it was notable that two Beryl Cook signed prints, which had failed to make £150 in a quarterly fine art sale, now fetched above this figure, the highest entitled ‘Shoe Shop’ achieving £220. Other successful paintings lots later in the sale included a Joseph Aufray watercolour at a triple-estimate £220, and a Helen Hale oil at £190.

Worthy of mention in the furniture section was a 19thcentury convex wall mirror with eagle surmount at a top-estimate £300, and a Middle Eastern folding table-top discretion screen which sold for £250 despite some losses to the inlay. A large consignment of garden statuary and ornaments from a local estate attracted much interest, with everything from wooden bears to Michelangelo’s David to a plastic peacock, lambs and rabbits! A life-size reconstituted figure of Venus took the highest price at £160.

On the more antique side of the furniture market, a bergere-caned occasional chair almost sold for £45 before the online bidders suddenly kicked into life and the lot soared to £200. A Victorian deep-buttoned nursing chair also made a respectable £130, but these prices for antiques were eclipsed by a pair of one-year-old Marks & Spencers deep-buttoned armchairs from a Yatton estate, sold well above hopes at £580. Another pair from the same house sold for £250, the same price as a ‘Gainsborough’ swivel office chair. Also performing for the modern team was a Brights of Nettlebed oak dining suite at £450.

A number of ceramics and glassware lots were worthy of mention. A Royal Crown Derby miniature tea set with oval tray sold at double top estimate to take £160, and a small group of Elton ware pottery sold above top estimate at £180. £160 was the price paid for a Whitefriars Tangerine ‘Sunburst’ vase from a local deceased estate.

In the Miscellanea, a selection of Britains cast farm animals and accessories attracted £150, whereas a brass carriage clock exceeded top estimate to sell for£280. Perhaps the most interesting item, which will be going to a US-based English expat, was a 19thcentury bronze Imperial Gill measure by Bate of London, at £220. Stamps also performed well at the sale, with a two-album collection achieving £200, four albums of modern presentation packs fetching £250, and the same price for a further six-album set.

Postcards continue to sell well, with highest price being £620 for a good selection of World War I French silks across three albums. Another local lot of Bristol and Weston view sold for £220. Perhaps the most interesting local lot was a Clifton Rocks Railway token and a Bristol Tramways & Carriage Co silver loyalty medallion, which far outstripped their estimate to sell for £160 [LOT 456]

The gold and silver section also saw strong results including a 22ct wedding band, and two Edward VII sovereigns all at the same price - £210. £320 was paid for a stainless steel Omega Seamaster from a Weston-super-Mare deceased estate, discovered just in time before the house clearers came in! [LOT 585].