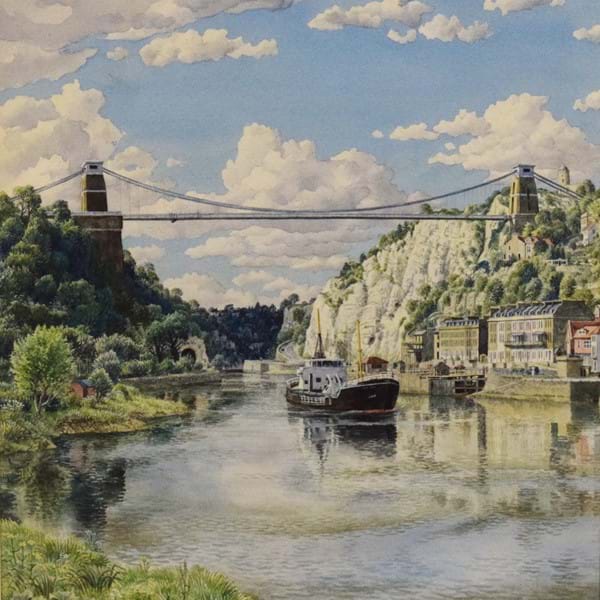 Clevedon Salerooms held their third Quarterly Specialist Fine Art Sale of 2019 on Thursday 12th September, where over 85% of the lots sold on a day with many pleasing results. The biggest surprise of the day came in the Miscellanea and Collectors’ Items section, where a scrap album of railway-related travel tickets was modestly-estimated, due to their being glued down. An intense bidding battle between a telephone bidder and the internet ensued, with the auctioneer’s gavel finally knocked down at £2,200.

The clock section had started proceedings and yielded £3,500 for a superb Black Forest musical clock from a Clifton estate [LOT 10]. Watches immediately followed, and the top price of the day, £10,000, was tendered for an 18ct gold Rolex Oyster Perpetual Day Date wristwatch [LOT 18].

The jewellery section also provided some excellent results, as £2,500 secured a Cartier diamond, ruby, sapphire and emerald brooch clip. A second brooch, this time citrine and diamond, followed closely behind at £2,200. The section was additionally bolstered by a fine collection from the estate of Miss Peggy Hoath, formerly Dresser to Her Majesty Queen Elizabeth II. Amongst the lots offered were a diamond and sapphire ring (£1,100), and a 22ct gold and opal suite of brooch and earrings (£1,800) [LOT 92]. Top price in the section was £4,200 for a diamond two-stone crossover ring totalling approximately 2.8cts.

The Oriental section followed, and from the aforementioned Clifton estate came five Chinese Canton famille rose teabowls and covers, which became one of the other surprises of the day when they sold online for a multiple-estimate £2,200. Other Oriental wares from this prestigious property also performed well, with a £1,100 bid for a large Japanese lacquer figure of the Buddha. A group of tobacco leaf wares from a returning customer immediately followed, and they too tripled hopes to take £1,500. From a local property, a pair of Burmese padouk console tables neared top estimate at £2,200.

From a Long Ashton property came a group of tribal items, brought back from Sarawak (Borneo) in the late 1920s by a civil servant and ancestor of the vendor. The excellent provenance helped these pieces considerably, as a headhunter’s shield sold for £1,900 and two containers (possibly for blowpipe darts or shamanic medicines) made £1,300. Also in this section was a rare Polynesian stilt step, which topped the section at £2,200.

In the ceramics section, a rare slipware rocking cradle from circa 1700 attracted four telephone lines and a large commission bid, and it was one of the telephone bidders who triumphed as it fetched a triple-estimate £2,700. The picture section followed, and a small watercolour ‘upgraded’ from the fortnightly sale topped proceedings, having been consigned from another significant local estate. The finely-painted view of the Avon Gorge by Stanley Badmin left its estimate far behind to sell for £2,700 [LOT 390].

Furniture was also quite buoyant, with four telephone bidders and three commission bidders losing out to an internet bidder as a Bechstein upright piano sold for a multiple-estimate £4,800. Modern Design continued to perform well, as a set of four Danish J. L. Moller Model 78 rosewood chairs sold for £1,100. The sale concluded with a superb collection of coins from a local vendor, and from over 115 lots, just two failed to find buyers. Many were gold sovereigns, most fetching in the £240-280 region as gold continues to rise, but there are always a few exceptions – and a particularly good half-sovereign made three times its usual price at £350, a 1746 Lima Crown sold for £500, and an 1847 Gothic ‘Undecimo’ Crown sold at £920, all above top estimate.

The next two weeks sees intense activity, with a large general sale on 26th September, valuation days on 30th September and 1st October 9.30am-1pm and 2-5pm, a specialist Jewellery and Watch valuation day on Saturday 5thOctober 10am-4pm at Stoke Lodge Bristol, and finally on Monday 7th at the Saleroom.