Enamel signs are a perennial auction room favourite. Clevedon Saleroom valuer Chris Yeo tells the story of one with a West Country connection. 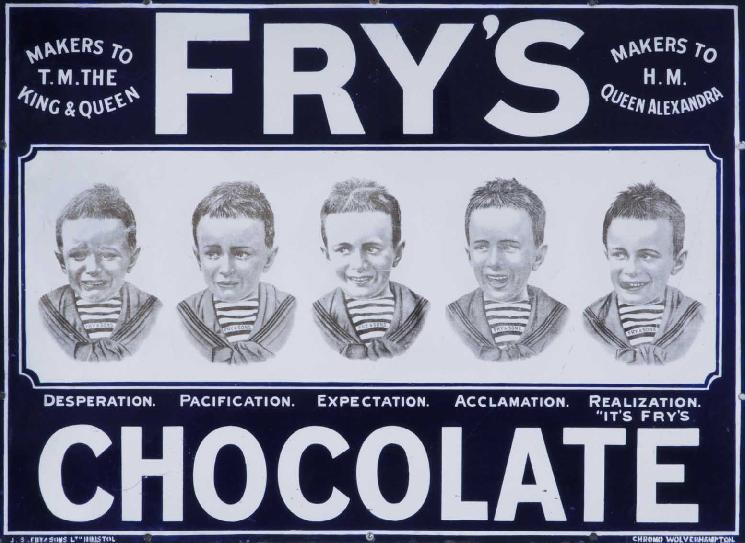 Nuts, whole hazelnuts. Cadbury’s take them and they cover them in chocolate. Every now and then an advert comes along that you just can’t get out of your head. For readers of a certain vintage that opening slogan will be instantly recognisable (and I bet you’ve now got the tune resolutely stuck in your head). The tv adverts of my childhood, be they bakers boys pushing bicycles up steep hills or Martian robots extolling the virtues of instant mashed potato are a world away from today’s digital advertising, all kilobytes and pixels clamouring for attention in the ether. Both, however, are light years away from the promotional tools employed by businesses a century ago. From the late 19th century to the 1930s, the most widespread forms of advertising were enamel signs. Displayed on the soot blackened walls of shops and railway stations the length and breadth of the country, their colourful artwork and snappy slogans proclaimed the superlative qualities of the well-known brands of yesteryear – from Brooke Bond Tea and Huntley & Palmer biscuits to Lifebuoy soap and Brasso metal polish.

Probably the best-known is for Five Boys Chocolate. Made by Fry’s in Bristol, the chocolate bar was a mainstay of the nation’s sweet shops for nearly a century. The famous sign shows five images of the same boy going through the full gamut of emotions from tearful state of chocolate-less desperation to joyful realisation “It’s Fry’s”. Based on photographs taken in 1886 the boy featured was five-year-Lindsay Poulton, the son of the photographer.

Many years later, when Lindsay was an old man, a newspaper tracked him down to see if he had any recollections of modelling for the legendary sign. Oh, indeed he had. Apparently is father had difficulty getting him to show the required degree of desperation and achieved the effect by tying an ammonia-soaked cloth around the boy’s neck! Happily, not all his memories of the day were so painful: Fry’s paid a staggering £200 (over £25,000 today) for the photographs. Nowadays an original Five Boys sign will set you back a great deal more than that - around £3,000 in good condition.