They shall not grow old 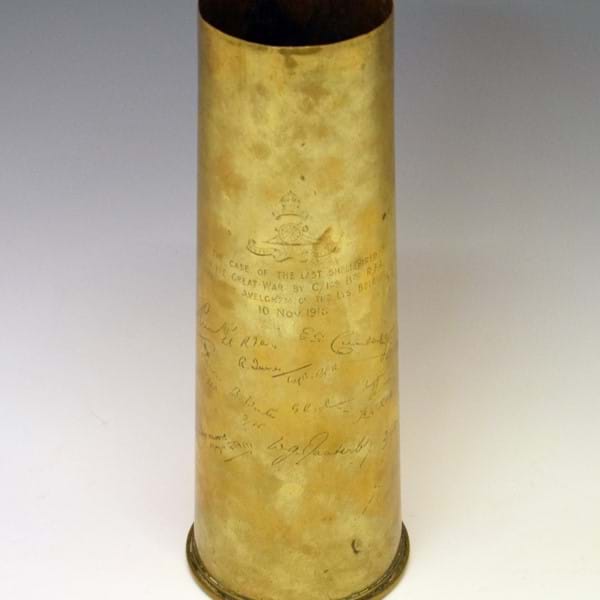 Clevedon Salerooms November Quarterly Specialist Sale included a modest looking lot, amongst the hundreds of items on offer , but one of particular significance in 2018. This First World War brass shell case emerged from a carrier bag during one of the Salerooms popular free valuation days. At a glance it appears to be a plain shell casing, identical to millions of others fired during the First World War. Closer inspection reveals four lines of text engraved below the Regimental Crest of the Royal Field Artillery. The text reads ‘The case of the last shell fired by C/149 Brigade Royal Field Artillery, from near Avelghem on the Lys, Belgium 10th November 1918’. Beneath this are the names of eight soldiers, their signatures and rank engraved into the case.

Auctioneer Toby Pinn has visited Flanders fields twice this year and suggests that the poignancy of this particular artefact is that the engraved names are those of soldiers who survived. In creating this memento from the last shell fired as their gun fell silent the day before the Armistice was signed, these brave soldiers bear witness to their own deliverance and pay tribute to all those who came before them and who sacrificed everything. The shell case sold for £380