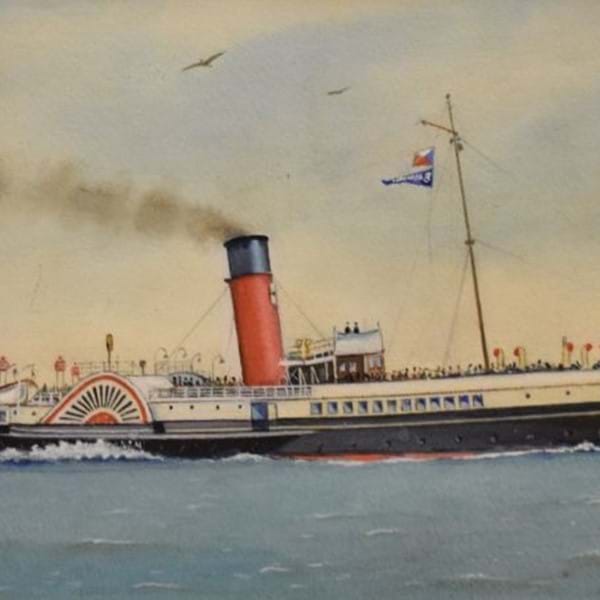 Clevedon Salerooms held their third sale in October, a fortnightly sale of Antiques and Collectables, at the Kenn Road Auction Centre on Thursday 29th. Over 800 lots were offered with in excess of 91% sold.

The sale commenced as usual with a good selection of jewellery, highlights of which included: a gentleman’s 18ct gold signet ring engraved with a stag, sold for a triple-estimate £350; a Masonic pendant at £320, and an 18ct fancy -link bracelet for £820. Gold sovereigns were selling at £290. The watch section included an open-face pocket watch at a surprise £550, and two retro Omega ‘Dynamic’ wristwatches at £320 [LOT 100].

Surprise of the day was for a heavily-damaged porcelain box, catalogued as “a.f.” (‘at fault’) due to a crack across the lid, alongside a another smaller with the crossed Ls mark of the famous French firm of Sevres, but 20th century. The two were modestly estimated, but attracted huge internet attention to sell for £900 [LOT 259]. Also performing well above estimate was a group of Oriental miniature vases at £450. Ceramics seemed to be buoyant with perennial favourite Lladro proving especially popular as a single figure entitled ‘Grand Dame, found elsewhere sold below £100, made £320 – apparently the top price for this figure at provincial auction. South Korea and Poland were amongst the more unusual locations bidding for ceramics in the sale. An extensive Spode ‘Fleur de Lys’ service sold for £400, a Royal Doulton ‘Sandon’ pattern service sold to South Korea for £300, and two services by Royal Albert in the typical ‘Old Country Roses’ pattern fetched £280 and £300 respectively. A Minton ‘Haddon Hall’ service also fared well at £220.

A local Yatton property has been the source of a steady stream of railway-related books; the latest (and last) offering was the icing on the cake at £500. From the same source, two railway plaques far outstripped the price of the more common reproductions to sell for £600. Perhaps the most unexpected price, especially given the shortening days, was the £280 bid for a ‘Coracle’ picnic set.

Traditional ‘brown furniture’ also provided hints of a resurgence as a 19th century twin pedestal desk sold for at a double-estimate £400. A Victorian walnut wardrobe with applied ‘figuring’ sold well above hopes at £380. Ercol continues to perform well as a ‘Windsor’ open bookcase made £280 and a low cabinet £380. Also providing retro chic was a Macintosh of Kirkcaldy sideboard, which sold with a matching table and G-Plan chairs for £450. Arkana of Falkirk also made a statement as a ‘sling’ chair and stool sold for £300 [LOT 771].

A watercolour of a paddle steamer signed ‘A. White’ initially looked like the work of a talented amateur, but there are a number of artist with this name - and others clearly thought differently, as the lot sold for £400 [LOT 660].