When Irish Eyes are Smiling

Clevedon Salerooms held another successful fortnightly sale of Antiques and Collectables at the Kenn Road Auction Centre on Thursday 1st October, the first of three this month. 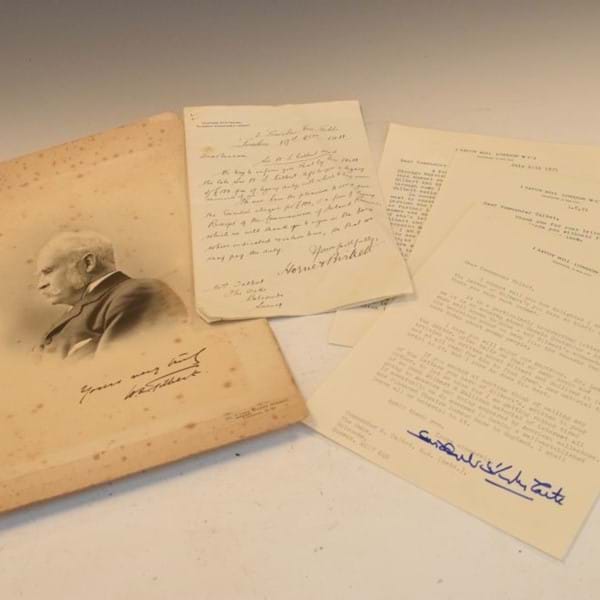 Of both local and Irish interest was a Victorian folio of ‘Addresses of Irish Loyalists resident in Bristol and Neighbourhood 1889’. This was competed for by online bidders on both sides of the Irish Sea, with an Irish buyer securing it as a multiple-estimate £310. A bundle of 19th century Irish documents of vellum was also competed for by both UK and Irish bidders to a triple-estimate £180. An 18th century child’s chair, probably Irish and carved with shamrocks, was reduced in height and had not found a new home four weeks prior in the quarterly sale at £100, but rose again to take £150 the second time round. Six monochrome photographs by prominent early 20th century artist Paul Nash were another surprise on the day. Showing coastal scenes, possibly in Ireland, they made a quadruple-estimate £420.

Starting proceedings as usual was the jewellery section, where a group of gold was sold on behalf of a local charity (and therefore free of charge) for £400. A good selection of costume jewellery also featuring some unmarked yellow metal also exceeded hopes to sell for £780. A bloodstone-set signet ring also sold above expectations at £350. Gold sovereigns were selling for £310, a little up on preceding sales due to a climbing gold price.

The silver section contained a good oak canteen of silver cutlery, which drew a number of commission bids. The best of these secured it at £680. A major surprise was a group of British and Polish War Medals, house in a table-top display cabinet, which caused a battle between UK and Polish online bidders to eventually sell to the former, at an above-estimate £680 [LOT 118].

Another pleasant surprise was a photographic card signed by composer W. S. Gilbert. Somewhat foxed (spotted) and unframed, of more interest was the solicitor’s letter which accompanied it, referencing a gift of £100 (a considerable sum in 1911) left to the recipient in Gilbert’s will. It duly sold well over estimate at £500 [LOT 147]. A group of French fashion magazines also caused a stir when they sold for £400, part of a collection of 19th and early 20th century fashion prints which fetched almost £1,000 overall.

Two items of retro pottery both performed above expectations. Troika has seen something of a resurgence of late, and a vase here sold at a multiple estimate £320. Even better was a Denby vase by Glyn College. Denby is usually in the sub-£50 price bracket, but this more desirable piece bucked the trend to sell for £400 [LOT 239].

Amongst the furniture, a handsome 19th century rosewood fold-over pedestal card table sold for a double-estimate £280. A pair of walnut panels, previously unsold at £80 in the quarterly sale, found success with a different set of buyers to sell for a surprising £220. The paintings section was graced by a watercolour of a turtle dove by celebrated Bristol artist Edwin Penny, and this sold above hopes at £300.