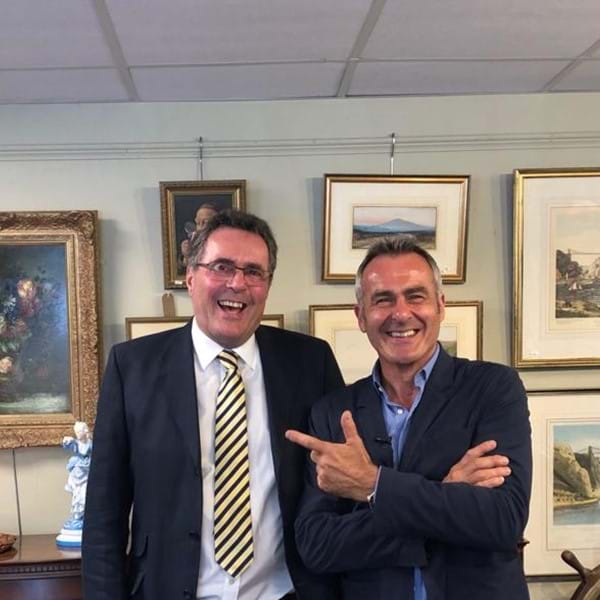 Thursday June 27th saw television crews at Clevedon Salerooms for the second time in a month, as this time Paul Martin and a new programme came to town. Two sets of budding antiques dealers competed against each other to buy lots at auction, to then sell on in the hope of making a profit. Two shows will be aired later in the year. Luckily, the camera crews brought the weather with them and a warm summer’s day saw over 640 lots go under the hammer, with over 90% sold.

A change to the sale order saw jewellery begin proceedings, with £500, £420 and £420 again bid for three diamond cluster rings. An increase in the gold price saw a top-estimate £800 tendered for a three-coin set of double, single and half sovereign and £550 for a yellow metal bracelet stamped 750. A 9ct gold serpent necklace and similar bracelet also exceed expectations to sell for £500. Watches followed, and a Tudor Oysterdate set the tone selling for £350, whereas an Omega Mariner III Seamaster achieved £250.

On an entirely different theme, an elaborate wooden birdcage of architectural form standing at over six feet in height surpassed its estimate to sell for £250. Another elaborate building followed in the form of a doll’s house with a superb selection of fittings, deservedly selling for £300. Staying with the subject of dolls, an extraordinary £580 was paid for a selection of Sindy and Sasha dolls including some in original boxes. Other toys of note included a charming pedal car in the form of a Series 1 Land Rover, which made a multiple estimate £220 - despite needing a little attention to the bodywork!

From a local house, a massive collection of ceramics saw a group of Chinese Canton famille rose sell for £420. Another group of ginger jars also sold well at £350.

Later in the sale, a number of furniture lots sold very well. A mid 19thcentury rosewood centre table made £500 – the split and faded top perhaps to be replaced with specimen marble, or something else befitting the fine base - and a modern tan leather easy chair and footstool by ‘Leather Chairs of Bath’ sold for £650. Also pleasing was the £350 bid for a Venetian mirror, despite some cracks and losses. Illustrating the strength of bidding in the fortnightly sale format, a Victorian ‘Bourne’ settee was sold at the second time of offering for £240, having been overlooked a fortnight earlier at £150! A cabinet advertising ‘Fry’s Choice Chocolate’ was another lot to perform well; with a replacement panel not putting the collectors off too much as it almost doubled estimate to take £380.