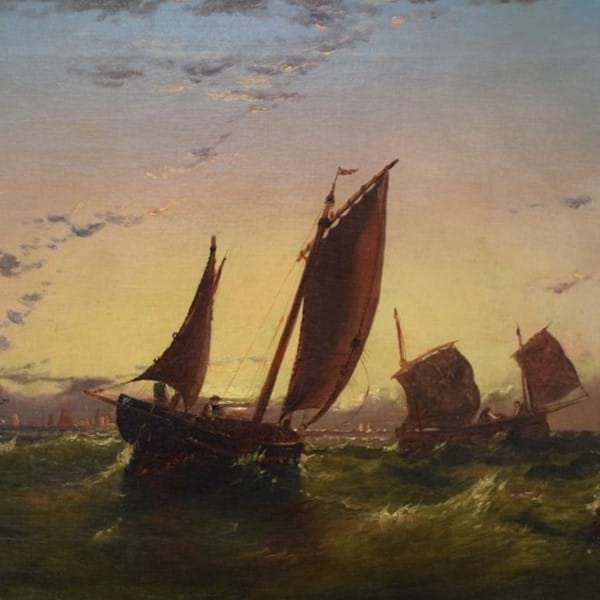 Leading the charge was ‘Dad’s Army’ a book by Jimmy Croft and David Croft signed by ten original cast members, including Arthur Lowe, John le Mesurier and Clive Dunn. Awarded in 1975 as a prize in a newspaper competition, its appeal to fans of the perennially popular series was clear. After a spirited battle between two online bidders it left its estimate standing to reach £400 [LOT 132]. Something else from the 1970s which has seen a resurgence of interest in recent years is Troika pottery. Proving the point, a small coffin-shaped vase sold extremely well at £200 [LOT 225].

Top of the sale, Jewellery proved to be popular. Standout item amongst a strong selection of lots was a string of amber beads which outstripped all hopes to reach £400 [LOT 60]. Pictures also performed well: an oil on board of shipping off a harbour at sunset attributed to William Adolphus Knell generated a flurry of bids to reach £350. The maritime theme continued with an oil on canvas by Arthur Wilde Parsons (1847-1920) of Shipping in a Rough Sea, which made a respectable £480 [LOT 310].

Prize for most unusual item in the sale went to a model of a Boar. Made of cast brass and near life size, it had been the source of some lively discussion before the sale as to whether it was in fact a warthog. Bidders had no such qualms and our porcine friend brought home the bacon at £250 [LOT 320].

In the furniture section good quality pieces performed well. The design of a mahogany twin pedestal desk had a dash of Aesthetic movement influence about it which must have struck a chord with buyers who took it to £160. A chest of drawers of the same period in Hungarian ash pressed all the right buttons to reach £190 [LOT 440]. Surprise of the day was provided by an Art Deco wall mirror. With a blue-tinted border its decorative appeal was clear to see. Bidders also thought so and the £360 it went on to achieve was, dare we say, a reflection of what buyers are willing to pay for good decorative pieces.

Clevedon Saleroom’s next auction of Antiques and Collectables will be held online on Thursday 18th February.