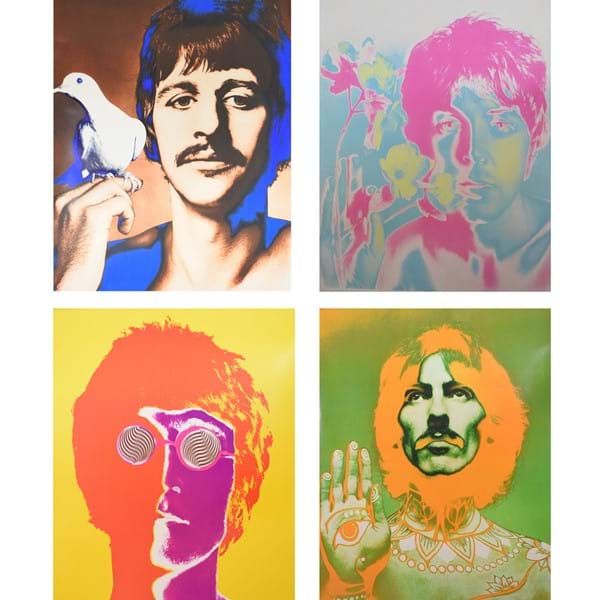 Clevedon salerooms held their latest fortnightly auction on Thursday 30th July at the Kenn Road Auction Centre. The gradual relaxing of lockdown has led to valuation days returning to something approaching their busy best, even though social distancing is still maintained – and this led to over 700 lots being consigned for the sale, with in excess of 91% sold on the day.

One of the best surprises on the day was a set of unframed, roll-up posters of the Beatles, sent in from a Weston-super-Mare house clearance as an afterthought. The posters had been published in the Daily Express, and the majority of this type of souvenir poster is worth very little… however, this set by Richard Avedon attracted considerable interest online amongst specialist collectors, and four modest commission bids were soon left behind as the set sold for a multiple-estimate £380. Whilst framed sets have made a little more, this is the highest price the auctioneers can find for an unframed set {LOT 225].

Staying with the musical theme, a pair of Tannoy Monitor Gold speakers were a rare consignment to the auction, and attracted two impressive commission bids following three full days of socially-distanced, appointment-only viewing. However, both bidders were disappointed, as the lot ran away online to sell for an incredible £1,600 [LOT 510].

With the increasing gold price during the past few months, jewellery valued even a month ago is now worth more than before. A 9ct gold bangle, for example, previously assessed at £200-300 sold for £400, and a belcher-link chain with sundry jewellery sold for a triple-estimate £500. Elsewhere, a Lady’s Rolex Oyster Perpetual Automatic wristwatch attracted four commission bids and sold for £680 [LOT 73].

Winston Churchill birthday ‘thank-you’ letters are a relatively familiar sight at auction, as these were printed with a facsimile signature to be sent out to the thousands who wrote to the wartime Prime Minister. On this occasion, the correspondent’s address was a little more interesting – the Blaythwayts of Dyrham Park, the National Trust property. This extra detailed partly explained the much higher price than for a standard letter - £250.

Two clocks from either end of the antiques spectrum sold well. An 18th century dial and movement by Clement of ‘Totness’ (Totnes, Devon) doubled hopes at £250, and a modern rosewood mantel clock made a surprising £200. Amongst the furniture, a Globe Wernicke-style stacking bookcase doubled expectations at £420.

The auctioneers now look forward to an extremely busy August, with another sale on Thursday 13th and the preparation of the first quarterly specialist Fine Art sale since lockdown, which promises to be one of their best yet, taking place on 3rd September.