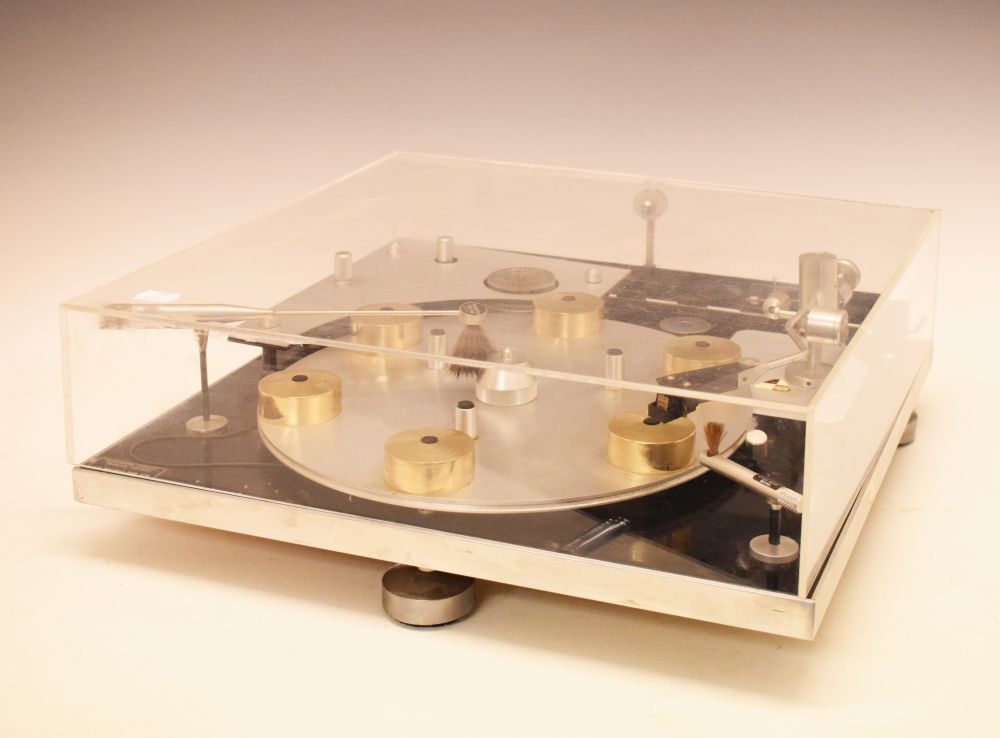 YOU SPIN ME RIGHT ROUND

Clevedon Salerooms held their regular Interiors sale on Thursday 21st July at the Kenn Road Auction Centre. Spirited bidding throughout the day saw auctioneers rewarded with a 90% selling rate from over 700 lots offered.

One of the day’s top performing lots came in the form of a record player, to be more precise a J.A.Mitchell Transcriptor Hydraulic Reference Turntable. A showstopping piece of modern design, it had originally been bought from the Design Centre in 1972. Its Perspex case had undergone several DIY repairs over the years, depriving it of some of its original good looks. This, however, did little to deter bidders who quickly took it to a very tuneful £750.

If the successful bidder was looking for a record to play which would sum up some of the other big hits of the auction they could do worse than Spandau Ballet’s hit single ‘Gold’. The jewellery section opened proceedings and it was there that some of the day’s best prices were achieved. Leading the way a 9ct gold curb link watch Albert with T-bar, lobster claw clasp, and rubbed George III spade guinea, weighing in at an impressive 83g it sold for £1,400; a 9ct gold curb-link Albert, with an Edwardian 9ct gold medallion sold for £750, whilst three 9ct charm bracelets realised between £500 and £580. Staying with precious metals, a John Pinches “1,000 Years of British Monarchy”(Sterling Silver Mint Edition), comprising fifty ingots,, each 65g approx, in fitted oak case, took the day’s top price at £1,700. In the Watches section Omega was the word; two gentleman's 9ct gold wristwatches both realised £200.

Amongst Pictures, a collection of oils on canvas – mostly architectural themed works - by artist Deborah Jones led the pack, with a combined total of £1,550 from the ten lots offered. An oil on canvas by Ronald Folland took the prize for the day’s most topical lot: ‘Thames at Westminster’, which showed the Palace of Westminster under an ominously stormy sky, sold for £200.

The Ceramics section had a few surprises in store, including a Meissen Marcolini period Monkey Orchestra singer, which sold for £320, just ahead of a collection of 19th Century saltglaze sprigged wares, which sold for £300.

More contemporary tastes led the way in the furniture section, where a late 20th century Italian marble dining table did remarkably well, selling for £880. More traditional areas of the market also made their presence felt; an unusual kidney-shaped Victorian mahogany Davenport quickly outgrew its estimate to sell for £200, whilst unsurprisingly, given the record-breaking temperatures seen earlier in the week, a five piece weathered teak garden set, also eclipsed its estimate selling for £220.